The Civic Library, created to promote books and reading, guarantees free access to all residents and offers bibliographic information services, local and interlibrary loan, reproductions and photocopies. There are also 2 workstations for free and open access to the Internet: use (subject to the presentation of a valid identity document) is for study, information and communication purposes. You can also access the WiFi service via your PC

The Library is connected to the regional system of Piedmontese libraries (Polo SBN - National Library Service): from the site Librinlinea it is possible to query the catalog on the cataloged documents (books, periodicals, manuscripts, relics). It carries out decentralized loans at bars and hairdressers and a private nursing home. The Arpino di Bra Library is on MLOL-Media Library On Line, with free access for all subscribers and over 45.000 ebooks, 80.000 audio books and more than 2.000.000 digital contents including apps, databases, music, courses and -learning, images, manuscripts, maps, periodicals, videos, video games. At this link instructions for accessing the service.

Founded in 1890 and then reconstituted in 1953, it has a rich catalog of more than 50.000 volumes, about 70 periodicals subscribed or received free of charge, over 1.000 photographs (mostly of local interest) and 140 slides (reproduction of the land registry of the late eighteenth century ). Despite having the character of an institute of general culture, there is no shortage of special sections including that of local history and one entirely dedicated to children.

The Children's Section of the Civic Library, for the exclusive use of children and adolescents, located on the ground floor, contains about 12.000 volumes, divided by gender and age group. It is divided into three rooms, one of which is reserved for children and the project Born To Read. Within this project, promoted by Piedmont region and funded by Compagnia di San Paolo and from Bra Savings Foundation, reading workshops are organized every Monday for children aged 3-6. Participate in the organization of the "Children's Book Fair", an event held every year in spring.
Important decentralized loan to schools with delivery in various plush braided schools of over 7.500 annual volumes.

The Civic Library also follows the management of the Toy Museum, a collection of over one thousand vintage balloons on the second floor of the building that houses the Library itself.

The collection of local periodicals from 1870 to 1930 and some bibliographic collections of particular value offer a rich insight into the social and cultural evolution of the Braida reality. Among the latter we point out the collections Giuseppe Tornatore, Antonio and Agostino Mathis, Eugenio Mortara (mathematics), Euclide Milano (manuscripts), Francesco Ravera (heraldry: made up of over 2000 loose autographed sheets with many color reproductions of coats of arms and heraldic symbols). In addition, that of Catterina and Tommaso Arpino (first editions and publications in foreign languages ​​of the works of Giovanni Arpino) and of Edoardo Mosca (over 450 volumes on military history, uniformology and collecting). The Historical Archive of the S. Spirito di Bra Hospital, recently inventoried and cataloged, has also been deposited in the Library since 2013.

The full and digitized reproduction of the volume edited to remind the World War I.

The Civic Library has joined the project, promoted by the Civic Library of Fossano, of digitizing the historical years of the main Cuneo periodicals. In particular, for the reality of Braida, among the periodicals available, there is the historic newspaper "L'Eco della Zizzola" (years from 1885 to 1926 and from 1946 to 1956). For consultation, you can connect to the site www.periodicicuneesi.it.

The Civic Library of Bra has participated since 1985 in the National Census of Italian editions of the 87th century (it has 500 editions of the XNUMXth century), in the national collective archive of periodical publications and in the Catalog of periodicals of Piedmontese libraries and is connected to the regional system of Piedmontese libraries (National Library Service - SBN): from the site Librinlinea it is possible to consult the library catalog on documents (books, periodicals, manuscripts, relics) received from the date of their joining SBN.

The Library houses a precious photographic collection, consisting of almost 500 images that tell the evolution of the city since the beginning of the twentieth century. 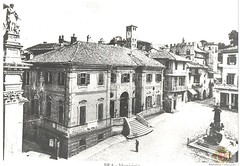